In the latest released World rankings for Squash, Gregory Gaultier of France and Nour El Sherbini are leading the Men’s and women’s category. While Gaultier has been there for the sixth time in his career, El Sherbini is there for 14 months now.

Gregory Gaultier overtook Egypt’s Karim Abdel Gawad to top the PSA Men’s World Rankings– making it the first time since 2012 that the top spot has changed hands four months in a row.

The French, who at 34 years and five months has broken his own record as the oldest ever World no. 1, lost the ranking to Gawad last month, but celebrated title wins at the Grasshopper Cup and Bellevue Classic during May to leapfrog Gawad. Gawad slips down to no. 2 – and reclaim top spot.

Mohamed ElShorbagy of Egypt, who had topped the rankings in March, and former World no. 1 Nick Matthew of England stay at numbers 3 and 4.

Ali Farag of Egypt is at number 5 after he was a beaten finalist in both the Grasshopper Cup and Bellevue Classic and moves into the world’s top five for the first time in his career. 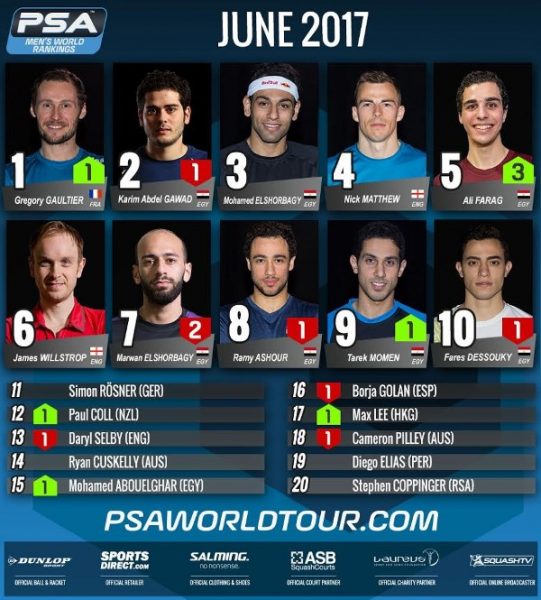 James Willstrop of England & Marwan ElShorbagy, Ramy Ashour, Tarek Momen and Fares Dessouky (all from Egypt) are the other listed in top 10 rankings. Egypt have seven-listings in the world’s top 10 indicating how strong their team is.

In the Women’s rankings, two-time World Champion Nour El Sherbini of Egypt leads the table as she completes 14th month at the top. She is followed next by her compatriot Raneem El Welily – the player she beat in April’s PSA Women’s World Championship final; France’s Camille Serme, British Open champion Laura Massaro and World Junior Champion Nouran Gohar being other in top five which remained unchanged.

Below them on the list are Malaysia’s eight-time World Champion Nicol David, British Open runner-up Sarah-Jane Perry, US #1 Amanda Sobhy and England’s Alison Waters, while the only change in the world’s top 10 sees Hong Kong’s Annie Au move up a place to overtake New Zealand’s Joelle King. Joshna Chinappa of India is at number 14, the only entrant to the PSA World rankings in any category.

For kids, you’ve to focus on individual, not group: Fide master Balaji

SPIETH Gymnastics to be the GC2018 Official Equipment Supplier