written by Priyansu Ganguly 16th May 2019

A legendary batsman by his own right, Sir Viv destroyed the Lankans on a historic day in the 1987 World Cup in Karachi. A gem of an innings, he smashed a century and 81 runs in 125 balls at a strike rate of 144.8 to help the Windies set up a total of 360. Remember, this was 1987! The Lankans could manage only 169 in reply. Some perspective, eh?

With 16 fours and 7 sixes, Sir Viv redefined World Cup batting at the time, scoring the highest individual score in a World Cup by a West Indian batsman till came a certain Chris Gayle in 2015.

World Cup has seen many gems and Sourav Ganguly’s 183 runs in the 1999 World Cup definitely stands out for being the most runs by an Indian in the World Cup till date. Striking at 115.82, Ganguly smashed Lankan bowlers, then defending champions of the World Cup for as many as 7 sixes during his innings.

This was Taunton’s last full ODI and Ganguly’s first World Cup century, seventh overall. India crashed in the Super Six stage, but this innings stood out in the memories of fans for enough to be a classic.

Gary Kirsten, a Proteas cricket legend, made history in the 1996 World Cup when he smashed a brisk 188*, the highest individual score by a South African in a World Cup till date. The record for most runs stood for almost 20 years before Guptill had his say in 2015.

Laced with 13 fours and 4 sixes, Kirsten pummeled minnows UAE as another one of the most runs’ innings came in the Indian subcontinent. South Africa won the match by a mammoth 169 runs. 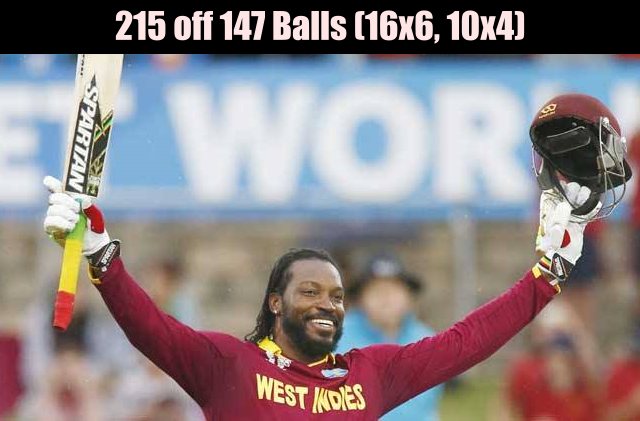 We’re talking on the highest individual scores, and can it ever be that Christopher Henry Gayle goes unmentioned?

Chris Gayle put himself on the history books, beating Sir Viv Richard’s score of 189, to score 215 and become the West Indian with the highest individual score in a World Cup innings. The onslaught came upon minnows Zimbabwe, as Gayle smashed 16 sixes to bring up his double century. 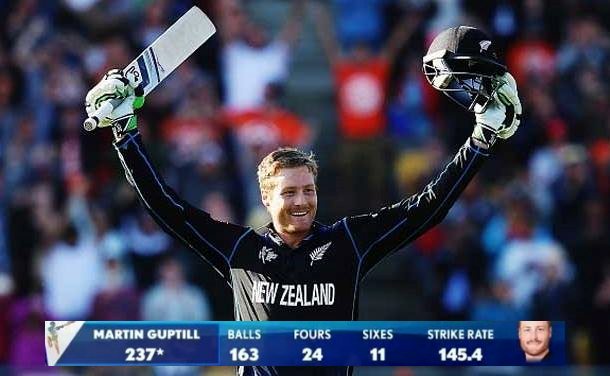 Martin Guptill had his say on the Windies’ fate in the 2015 World Cup as he ended up with the highest individual score by a batsman in any World Cup game. Having lost three fingers in an accident in his childhood, ‘two-toes’ Guptill smashed a world record 237 unbeaten to put West Indies out of the tournament.

Co-hosts New Zealand went on to lose in the Final to Australia, but Guptill’s innings stand out as one of the best of our highest individual score series.

Simple, humble and inquisitive. I sleep, eat and breathe sports, Football primarily. An engineer by profession, Sports columnist by hobby! Find me Sports to watch and we can settle for eternity.

Cricketers Who Have Hit the Most Fours in International Cricket

Cricketers Who Have Hit the Most Sixes in International Cricket

Cricketers Who Scored the Most International Fifties

Cricketers Who Scored the Most International Hundreds

Australia bring in Six changes to their CB Series Squad

SL in Ind: Eden, Kotla get Tests, T20I for Wankhede