Suryakumar Yadav delivered a 360-degree masterclass en route to a century, but England prevailed by 17 runs over India in the third T20 International on Sunday. England defeated India’s second string attack with a mammoth 215 for seven, thanks to Dawid Malan’s elegant 77 off 39 balls. Surykumar (117 off 55 balls) kept India in the hunt with his elegant effort, but lacked support from other batters while chasing the massive target. In 20 overs, India’s innings ended at 198 for 9.

India won the three-match series 2-1 after winning in Southampton and Birmingham. India had started the run chase on the back foot, managing only 31 for 3 in 5 overs.

Suryakumar Yadav toyed with the opposition bowlers and picked his shots throughout the bottom, as he usually does.

Earlier, England reached 52 for 1 in six overs thanks to skipper Jos Buttler (18 off 9 balls) and Jason Roy (27 off 26). Malan and Liam Livingstone (42 not out off 29) then put on an entertaining 84-run partnership to lay the groundwork for a massive total.

The Indian next generation was thoroughly beaten by a potent England batting lineup that had stunned them in the first two games. Ravi Bishnoi’s effort of two for 30 in four overs was the lone bright spot in an otherwise strange bowling efficiency.

The two lofted square drives off pacers Richard Gleeson and Chrish Jordan that went all the way for six were highlights of his superb innings.

By opening the face of the bat and guiding a low full toss off Willey between backward level and brief third man, he became the fifth Indian to reach 100 in T20 Internationals.

Suryakumar Yadav reduced the equation to a manageable 66 off 30 balls earlier than running out of companions on the opposite finish.

Openers Rohit Sharma (11) and Rishabh Pant (1) were out cheaply, and Virat Kohli (11) was caught at cowl attempting to construct a third consecutive hit after gathering a 4 and a straight six off David Willey.

Suryakumar Yadav reintroduced India into the game with a 119-run partnership with Shreyas Iyer (28 off 23), who was a spectator to his partner’s brilliance for the majority of the partnership.

Earlier, England won the toss and elected to bat first in the match, with Reece Topley and Phil Salt replacing Sam Curran and Matt Parkinson in the playing XI.

Avesh Khan opened the attack for India in the absence of Bhuvneshwar Kumar, bowling 5 dots for 2 runs. Umran Malik of the Express bowled the second over, which yielded 17 runs. Ravi Bishnoi bowled the third over, allowing 8 runs.

Avesh Khan dismissed Jos Buttler in the fourth over, who looked in good form and scored 18 runs off 9 balls while conceding only 5 runs. England scored 11 and 9 runs in the next two overs to reach 52/1 at the end of the powerplay.

Umran Malik took his first wicket of the match when he caught Jason Roy on the first ball of the eighth over. Roy scored 27 runs on 26 balls, including one four and two sixes. 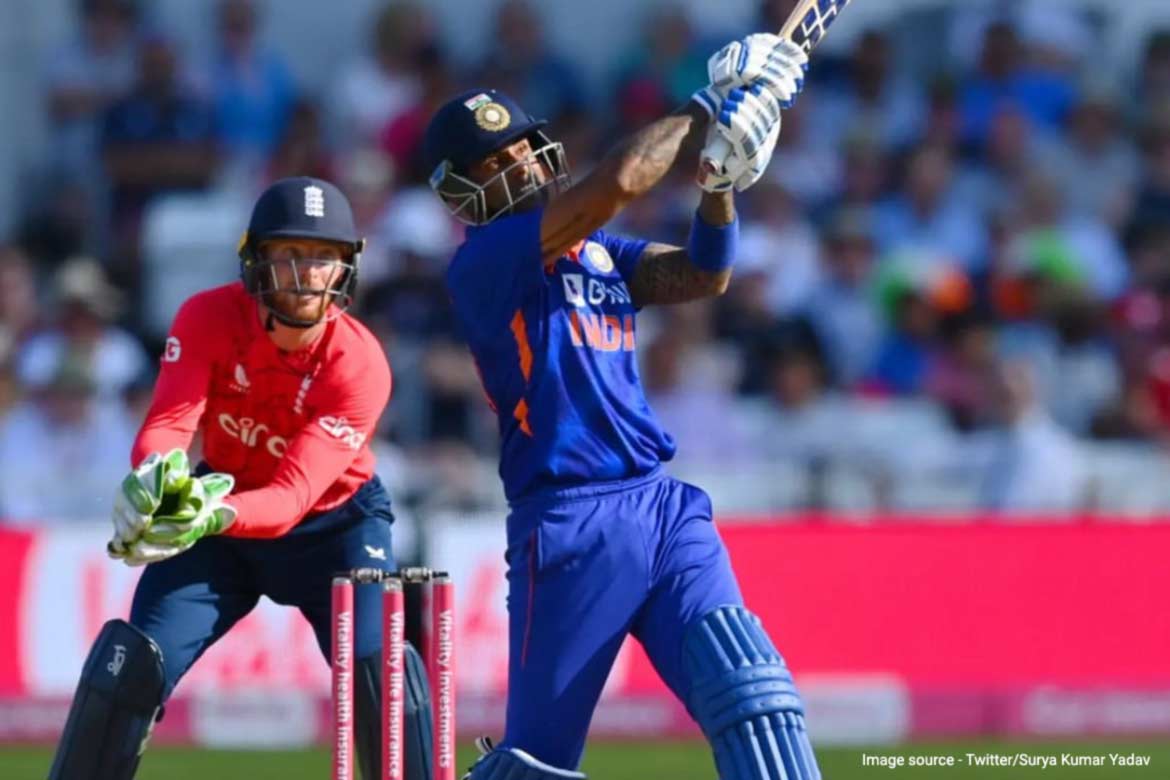 The 31-year-old pacer Harshal Patel then dismissed Phil Salt for 8 on the third ball of the tenth over with his trademark slower full-toss.

Following that, Dawid Malan and Liam Livingstone combined for 84 runs before the former was dismissed by Ravi Bishnoi. Malan scored 77 runs off 39 balls, with six fours and five sixes.

Finally, Suryakumar Yadav hit his maiden T20I century, becoming the fifth Indian batter to do so. He hit 14 fours and six sixes in 117 runs off 55 balls. However, he received no help from the other end, and India lost the match.