Skipper Dipesh Kumar Sinha was the highest scorer for U Mumba Volley with 11 points (5 spikes, 2 blocks and 4 serves). Rudy Verhoeff yet again equalled his individual points record of 20 points in a match (14 spikes and 6 serves) only to end in the losing cause.

It was a hard-fought battle as both teams knew that it is a crucial game and didn’t allow each other any respite. Chennai Spartans got the first advantage as they went into the first Technical Time Out (TTO) with a spike from Rudy Verhoeff at 8-7.

Chennai looked in good rhythm after the TTO, as they mounted a 13-8 lead with the help of Naveen Raja Jacob’s Super Serve.

U Mumba Volley Came back into the Game

U Mumba Volley called for a Super Point at 8-13 and won the same. It was the start of a comeback. At 14-10, it looked like Chennai will win the set but U Mumba closed the gap with the help of three errors by Chennai to eventually win the set 15-14.

U Mumba Volley came out all guns blazing in the second set as they took a 4-0 lead. They were riding high on the momentum of the first set. Skipper Dipesh Kumar Sinha, Vinit Kumar and Coskovic did bulk of the scoring. The set ended at 15-8 in their favour as they took a 2-0 lead in the match.

In the third set, it seemed like a similar story but Chennai wasn’t going down easily. From 2-6 down, Chennai closed the gap to 6-7 when a Super Serve by Verhoeff gave them the advantage entering the TTO. At 9-11, Chennai called for a Super Point but failed to convert. U Mumba Volley finally won the set 15-10 and obtained an unassailable 3-0 lead in the match.

In the penultimate set, it was Sinha and Coskovic who looked in scintillating form as they scored 5 out of 8 points to take an 8-6 lead at TTO for U Mumba Volley. At 7-9 Chennai called for a Super Point and converted to level the score.

U Mumba immediately called for a Super Point but an error by Pankaj Sharma gifted Chennai the point. Chennai finally opened their account in the match winning the fourth set 15-10.

Both U Mumba Volley & Chennai wanted to win the final set badly as they went toe-to-toe for each point. Chennai came up with the goods as a Super Serve by V Hariharan and Verhoeff respectively helped Chennai take a 10-5 lead. 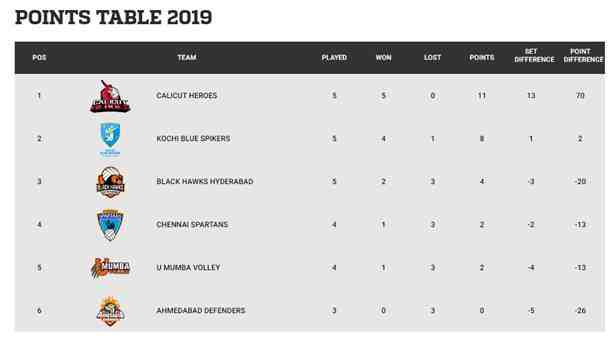 Chennai Spartans will take on Ahmedabad Defenders on February 17th 2019. It will be broadcast Live and Exclusive on SONY SIX and SONY TEN 3 and will be streamed live on SONY LIV from 6:50 PM IST.

RuPay player of the match: Dipesh Kumar Sinha of U Mumba Volley