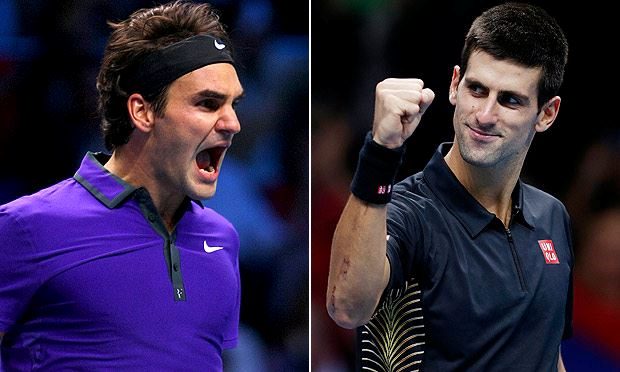 Federer and Djokovic have faced each other 47 times, since their first match in Monte Carlo in 2006. Although Federer was pretty dominant in the early part of their rivalry and even won all of their first 4 meetings, it was Novak who wrestled control in the later part and continues to have an upper hand in match wins till now.

One of the trademark features of their rivalry is contrasting style of play. Federer likes to attack and often come to the net while Djokovic has one of the best defenses in history and an excellent baseline game.

Another important feature of their rivalry has been some personal differences off the court. Novak’s frequent retirements from the matches early in his career didn’t go well with Roger. He even called Novak as, “bit of a joke”. When Djokovic defeated Federer in the Australian Open semi final of 2008, the Serb’s mother told the press, “the king is dead”, referring to the end of Roger’s dominance.

The same year in Monte Carlo Federer would turn to Djokovic’s parents in the stands telling them to “keep quiet” as they interrupted the line judges calls. Even today the personal tensions between the two legends are visible.

In recent years, Djokovic has pretty much dominated his great Swiss rival and leads their head to head by 25 -22 in 47 matches. In fact the rivalry can be divided in two stages. Till 2010, Federer was dominant winning 13 out of their 19 matches but since then Djokovic has been on a roll winning 19 of the 28 matches. Novak has also defeated Roger in all of their last 4 meetings. 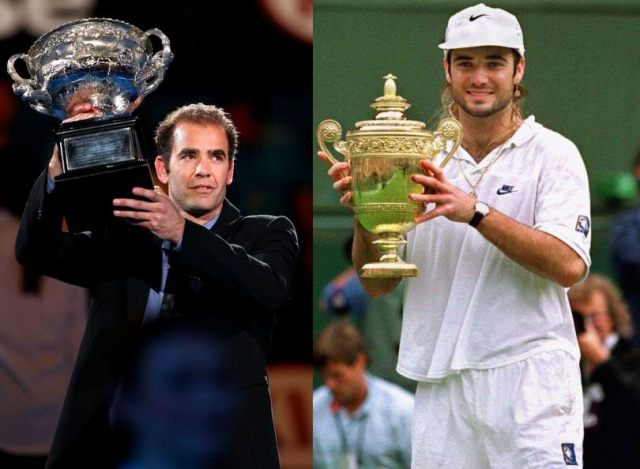 Pete Sampras and Andre Agassi were the superstars of Men’s tennis in the 1990’s. While Agassi had this flashy and star like image both on and off the court, Sampras was more of a quiet and shy champion, who concentrated more on being a prolific tennis player than a celebrity.

Pistol Pete was known is one of the greatest servers in tennis while Agassi probably the best ever returner. This created a sort of contrast in their game styles. This rivalry reached it first peak when the two met in the 1992 US Open final. Sampras would go on to win the match in 3 straight sets.

Over the years they met 20 times; with Sampras have the upper hand of 14 wins and 6 losses in their head to head. A fitting end to this great rivalry was the 2002 US Open final, which would be Sampras’s last match and which he won in 4 sets.

In their illustrious careers, both champions made history in their own way. While Sampras broke Roy Emerson’s 3 decade old record and become the winner of most Grand Slams, Agassi became 2nd player in the Open Era and only 5th in tennis history to win all 4 majors, when he won the French Open 1999. 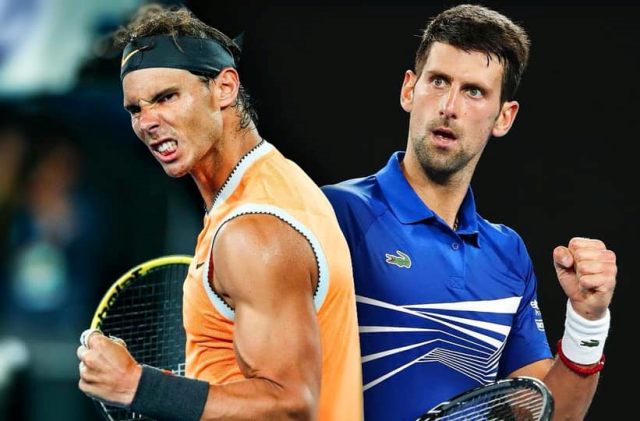 No rivalry in modern day tennis has been some much forceful and had as many number of matches as Nadal and Djokovic. With both players being of almost the same age this rivalry has pretty much shaped the last decade in Men’s tennis.

In the initial years, Djokovic was completely dominated by Rafa and their win to loss record till 2010 was 16-7 in Nadal’s favour. The Serb however came out all guns blazing in 2011 and took 6 consecutive matches of Nada.

Since then this rivalry has been pretty much tilted towards Novak. As of now, it is 28-25 in favour of the Serb. The greatest feature of Nadal- Djokovic rivalry is the similar playing style of these two players.

Both have incredible defense and a baseline game of highest standards. It is for this reason that this rivalry has produced the longest Grand Slam final of all time. This was during the Australian Open 2012.

With both Nadal and Djokovic still dominant in Men’s tennis, this rivalry promises many exiting matches still to come. 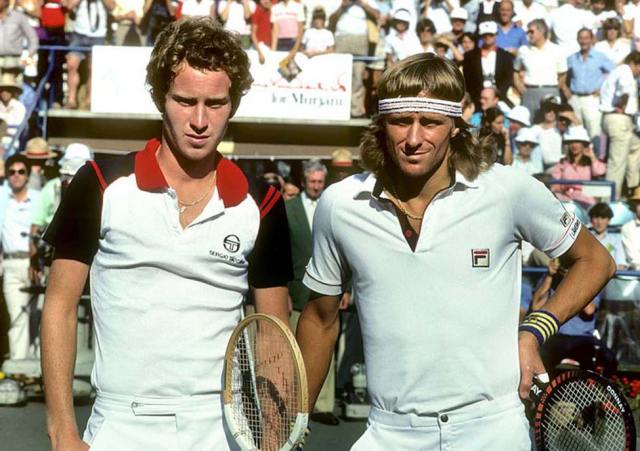 Björn Borg and John McEnroe played just 14 matches against each other. Yet, their rivalry was so intriguing and tightly contested that it became one of the greatest all time rivalries in tennis.

In the 1970s Borg was nearly unbeatable in both Wimbledon and Roland Garros. He won 6 Majors in Paris and 5 consecutive titles at the All England Club. The first time Borg was challenged at Wimbledon was in 1980 finals by John McEnroe.

The match would go on to 5 sets. Though Borg came out victorious McEnroe knew he had played a historical match and was one step close to the trophy.

Borg and McEnroe met once again at the same venue. This time however the young American would have his revenge and come out victorious in 4 sets. Borg again lost to McEnroe in the same year at the US Open finals. The losses hurt Borg so much that he retired from tennis only at the age 25.

Due to Borg’s premature retirement, the 2 only played 14 matches against each other. Their head to head is an evenly matched with 7 wins each.

What made this rivalry even more interesting was the difference in their temperaments. Bjorn Borg was known as the super Swede with “ice blood” in his nerves. He would never show any expressions or emotions during the match.

Across the court, McEnroe was known for his flashy temperament and bratty image. He even used to yell at referees and is still famous for his “are you serious” remark.

However such was the fan following of this rivalry, that in 2017 a movie was made on it, which attracted a lot of global attention. 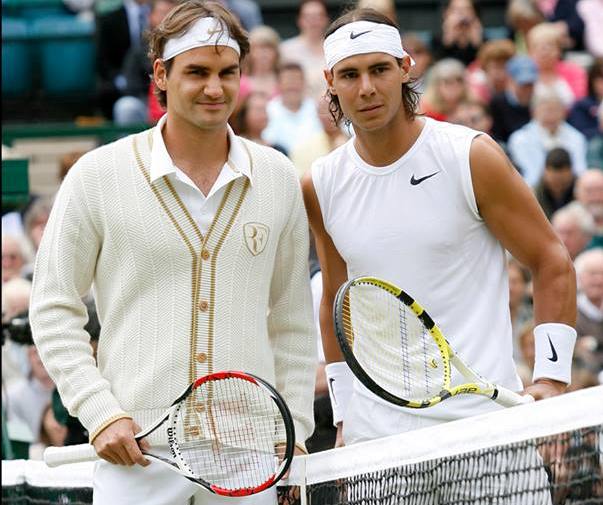 Roger and Rafa are two of the most popular athletes in the history. Their rivalry now 15 years old continues to amaze and intrigue tennis followers. The lefty-righty contrast, the attack vs defense game style makes this rivalry exceptional.

The two first met at Miami in 2004, when Rafael Nadal, then a young upcoming teenager from Manacor beat the then World number 1 Roger Federer in 2 sets. Exactly an year later Federer met Nadal at the same venue, this time in the finals. It seemed to be the repeat of the last year when Roger went 2 sets down but he showed great persistence to come back and win the last 3 sets.

Over the next 5 years Roger would dominate at Grass and Rafa created a sort of hegemony on the Clay. They would even trade Roland Garros and Wimbledon finals in 2006 and 2007.

But it was in 2008 Wimbledon final when Rafa, who was knocking the doors since last 3 years finally breached Federer’s fortress. It is widely called as the Greatest Tennis Match ever played when Nadal beat Federer in 5 crunching sets at his own territory. He even went on to beat the Champion in the next Grand Slam final they met in Australia in 2009. Federer unable to take consecutive blows broke down that day at the presentation.

Federer however would have his revenge 8 years after. The two met in 2017 Australian Open final at the Rod Laver arena. The match again went to 5 sets again and when Rafa broke early in the 5th, it seemed as history was repeating itself. Federer however on that day was not to be denied his date with destiny. He played what his later called as the , “best 30 minutes of his life” and won his 18th Grand Slam title.

As exciting as the Fedal rivalry has been, it is the Spaniard who has always has the upper hand over his Swiss rival. Till 2015 Rafa enjoyed an almost one sided head to head over Federer. He had won 23 matches and lost only 10 against the great Swiss. However, Roger has won all of their last 5 matches taking the head to head to 23-15 in favour of Nadal.

The Fedal rivalry however has put tennis on the world map and as these tow Superstars move towards the twilight of their Career’s, their great rivalry would be remembered for ages.

4 Players With The Most WTA Year-end World...

Federer vs Nadal: The mother of all rivalries...